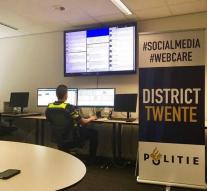 enschede - Police officers should also monitor social media. Police Netherlands wants all units within three years to have their internet contacts in order.

A pilot with a Social Media Team of the police in Twente is a great success. There, twenty agents manage the digital channels of the police.

Last week, a teenage girl was discovered who wanted to commit suicide. The desperate puber from Enschede could be helped.

She had contacted the social media surveillance via Instagram.

'We want to connect with society. The citizen expects us, 'said Ron de Milde, responsible for the application of new media to the police. A large part of the life of young people plays down on social media.