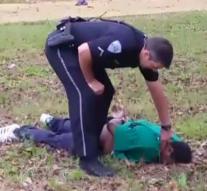 charleston - The criminal case against the US policeman who shot a black man last April, has been annulled. That statement spoke of South Carolina court Monday off. The jury did not come to a clear judgment on whether the officer should be prosecuted for manslaughter or murder.

That was the reason for the court to annul the case. After four days of deliberation and four weeks of testimony did not the jury to reach a unanimous verdict. Justice must now decide what is going to happen. The case can be brought back to court.

The incident, which was filmed by a bystander, led to international fuss. The video shows that the police targeted several times shooting in the back of the man running away. The victim was unarmed and died from his injuries.