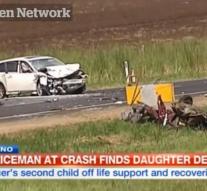 - An Australian policeman has made a gruesome discovery when he arrived at the scene of a traffic accident. The man took his two young daughters and their babysitter in the wreck of a car at the site Casino, the Brisbane Times reported Sunday.

The car with the children would be torn in half by a collision with another car. When the agent arrived, his four year old daughter already deceased.

The policeman tried to help desperate, but was there as a witness hardly able to. He was shocked and upset. He wanted to know what had happened , the woman said to the Daily Telegraph. A short time later arrived the mother of the two children in the place of the accident.

The other daughter (2) of the bunch, a 7-year-old girl and 18-year-old babysitter were injured. The 81-year-old driver of the other car had to be taken to hospital. On the cause of the collision is still nothing disclosed.