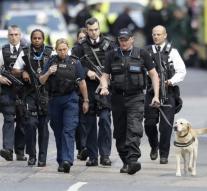 london - A traffic officer has only armed with his weapon trying to stop the attackers in London. The chairman of the British Transport Police Federation expressed his great appreciation for the heroic performance of the agent.

Tourists have tried to stop attackers using means like chairs and tables. According to eyewitnesses, the attackers called 'this is for Allah' as they put people down. A bystander tried to throw off an attacker by throwing bottles and chairs. 'I hoped the men would go after me and then be shot by the police. '

Eventually eight agents fired a total of fifty bullets. The attackers therefore died, a bystander was injured. The police chief praised the courage of the special agents who drove on these 'potential suicide terrorists'. A commission investigates the police violence, but it is clear now that the situation in which the agents operated was 'critical'.