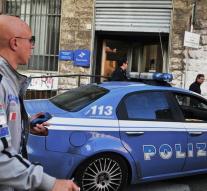 milan - A man threw a military and an agent on Milan's main train station on Thursday night. The police arrested the alleged perpetrator, reported Italian media.

The two victims were transferred to the hospital. One of the men was injured on his arm, the other victim had a neck wound. Their state would not be 'worrying', the newspapers La Repubblica and Corriere della Sera reported.

The perpetrator, allegedly a man of North African descent, is a well-known police officer. He would have been arrested in the past on suspicion of drug offenses. There is nothing about the motif for the sting party yet.