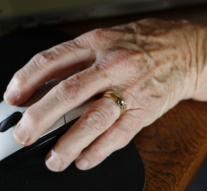 the hague - The 75-person over the internet is what concerns catching up. Had four years ago, slightly more than 40 percent of the Dutch population aged 75 and over at home access to the Internet, this year has risen to 60 percent.

The age group makes use next PC or laptop increasingly smartphones and tablets. In 2012 had 10 percent of the over-75s a tablet and a smartphone 5 percent. Now 30 percent of those devices in the home, the Central Bureau of Statistics reports after investigation.

At the slightly younger group of 65- to 75-year-olds is the tablet and smartphone ownership in the same period even more than doubled. The tablet ownership among the elderly increased between 2012 and 2016 from 28 to 60 percent, owning smartphones at the same time increased from 24 to 65 percent.

E-mail is used most often in 75-plus. Nine in ten use the Internet for the elderly there. Around 70 percent goes to the Internet to search for information about goods or services and banking. Around 60 percent of shopping online and searching for health information, according to the CBS.

Of 65- to 75-year-olds used 66 percent of the Internet to read online newspapers and news or to make use of social media (36 percent). The over-75s do so less frequently.

Of all people have of our country has 94 percent Internet access at home, 92 percent uses it.