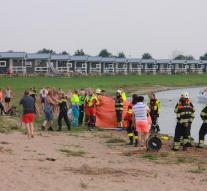 maurik - Two young Syrians were killed by drowning on Tuesday. That might trigger a discussion again at the start of this month by the Royal Netherlands Swimming Pool.

The police reported Wednesday that the man who drove a day earlier in a Gelders recreation area is a 23 year old man from Syria. In a pond in Eindhoven the same day a fourteen year old boy who also came from Syria was drowned.

The man who disappeared under the water of the 'Island of Maurik' was removed from the water only after an extensive search and was no longer able to save. The same was true for the boy in Eindhoven who headed into the Henri Dunantpark.

Over the past few months, more Syrians have drowned in Dutch waters. At the end of June, a 13-year-old Syrian boy died in Tiel at the Waal, and this month drove a 16-year-old boy from the Arab country in a swimming pool in Venlo.

Trade union FNV argues after the death of the boy in Eindhoven to reduce cuts on team teams. The fire department in Eindhoven has no own diving team anymore.