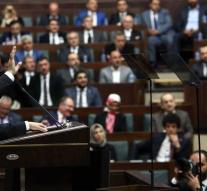 ankara - Two Turkish opposition members lost their parliamentary seats. The parliament decided to do so after the politicians of the pro-Kurdish party HDP were convicted for various criminal offenses.

One court had found one of the parliamentarians, Selma Irmak, guilty of membership of a terrorist organization. According to state press agency Anadolu she was sentenced to ten years in prison. Her colleague Osman Baydemir has been sentenced to 17 months in prison because he would have offended the police.

The opposition party won 59 of the 550 parliamentary seats in the 2015 elections, but 11 HDP members have since been expelled from parliament. That decided in 2016 to cancel the immunity of almost all HDP parliamentarians. This allowed them to be prosecuted.