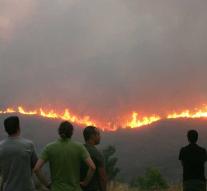 athens - The head of the Greek civil protection service GSCP has submitted his resignation on Monday. The government had already replaced the chiefs of the fire brigade and police a day earlier. That happened in the aftermath of the deadly natural fire in the vicinity of Athens.

The death toll from the inferno last month rose to 91 on Sunday. Then a 95-year-old man died in the hospital, reports the Greek newspaper Kathimerini. There are still a few dozen people with burns in the hospital. Six of these patients are still being treated in the intensive care unit.

The Greek authorities received a lot of criticism after the fire. The opposition blamed the government for failing to protect lives. Minister Nikos Toskas (Civil Protection) stepped up Friday. He had tried that immediately after the fire, but then Prime Minister Alexis Tsipras refused to accept the resignation of the former general.