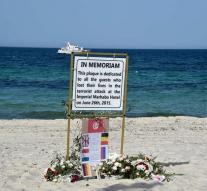 - The number of foreign tourists to Tunisia again fell sharply in the first half of this year. This emerges from figures published Monday, a year after a terrorist 38 people had been shot dead in the North African country.

The shooter killed his victims, mainly British travelers on a beach at the resort of Sousse on 26 June 2015. The attack also meant a severe blow to the economic key tourism sector. The attack came three months after gunmen had slain all 21 tourists at the Bardo Museum in the capital Tunis. Terror movement Islamic State claimed both attacks.

Data from the Ministry of Tourism show that the number of foreign tourists in the first six months of this year fell 21.5 percent compared to the same period last year.