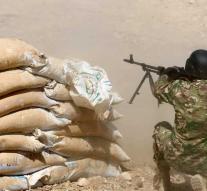 damascus - Russian fighters have again carried out air strikes on targets in the Syrian Idlib province. That's what a rebel leader and the Syrian Observatory for Human Rights say, a UK based organization that relies on local sources.

Idlib is considered the last large enclave still in the hands of insurgents fighting against the Assad regime. That gets support from Russia and Iran. In Idlib there are an estimated ten thousand fighters and millions of civilians. The most powerful rebel group in the province is the jihadist Tahrir al-Sham.

International fears of a humanitarian catastrophe in a major offensive in the rebel area. Recently, the American President Donald Trump and Pope Francis warned of this. UN envoy Staffan de Mistura has called for humanitarian corridors to be set up so that civilians can flee.

The Observatory says that the Russians stopped air strikes in and around Idlib on 15 August. Other pro-government troops would then have carried out shelling.

The Turkish authorities are preparing for a possible escalation of the situation. Additional army vehicles have been sent to the border area, say sources against the Hürriyet newspaper. Turkish observation posts in Idlib have also been strengthened and a refugee camp in the area has been expanded.

Turkey fears a new refugee flow and humanitarian drama as Syrian troops and their allies try to get Idlib in their hands. That province is considered a stronghold of opponents of the Syrian President Bashar al-Assad. The Turkish minister Mevlüt Çavuşoğlu (Foreign Affairs) warned last month that a 'military solution' for the situation in Idlib would be a disaster.

The Turkish government has now sent additional equipment to the border. According to the sources of Hürriyet, it concerns, among other things, tanks with special observation equipment. He can monitor movements of groups of refugees. In Idlib, which borders Turkey, tens of thousands of civilians are located alongside tens of thousands of fighters.