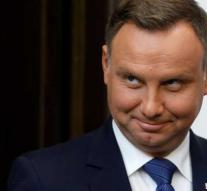 warsaw - The Polish government has once again sent judges of the Supreme Court to retirement. Twelve magistrates had reached the recently reduced retirement age and had asked President Andrzej Duda to stay on. Five of them are allowed to stay, seven others are not allowed to do so without giving a reason.

In July, a controversial law of the ruling party Justice and Justice PiS came into effect, so that supreme judges at age 65 have to retire. If you want to continue to serve longer, you need permission from the president. Opponents see a trick of the authoritarian PiS to purge the judicial system and appoint new judges themselves. The European Union is also strongly opposed to this practice.

Brussels fears that Warsaw is putting the legal system under political control, affecting dismissals and appointments of judges in lower courts, the Supreme Court and the Constitutional Tribunal. That goes against a democratic independent constitutional state, one of the core values ​​of the EU.