Home / World / Again passengers are unwell on flights to the US 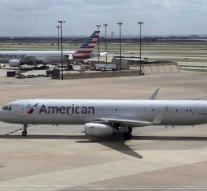 philadelphia - The American authorities have again raised alarms about disease symptoms on board international flights. Passengers and crew members on board two aircraft must undergo a medical check, says a Philadelphia International Airport spokesperson. It involves about 250 people.

A total of twelve people would suffer from flu-like symptoms. They were on board the two American Airlines flights from Paris and Munich. Health service CDC has been informed about the incident.

A similar incident occurred in New York on Wednesday. There, the authorities placed an Emirates plane under quarantine as a precaution. There were nineteen people who were ill.