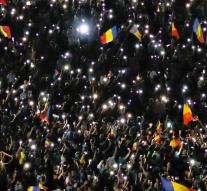 bucharest - Romanians have also flocked on Saturday in the capital Bucharest and in other places to protest against corruption and to demand the resignation of the Social Democratic Cabinet. It was less than Friday, when an estimated 100,000 demonstrators were on their feet.

Now about 40,000 angry people gathered in front of the government buildings. The protest went peacefully. A day earlier, the riot police dispersed the crowd with tear gas and water cannons. Hundreds of people needed medical care.

Except in Bucharest, demonstrators in Cluj, Sibiu, Brasov, Timisoara and Iasi also expressed their dissatisfaction with the country government. This is accused of bribery practices, political tampering and attempts to remove corruption cases from the criminal sphere.