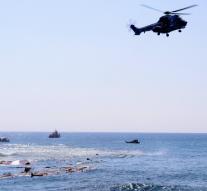 athens - In the Aegean Sea in Greece have turned back boatloads of refugees. In the night from Thursday to Friday drowned least 21 people, including nine children.

According to the Greek coast guard hit a boat near the island of Kalymnos. Granted Shots rescuers were able to save 138 people from the water, but for eighteen people the help came too late. An unknown number of people are still missing.

Rhodes hit by another boat. There, three people drowned and three refugees were missing. Six people were saved.