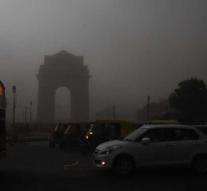 delhi - Due to heavy storms in India, many people died again on Sunday. The media speak of at least forty. In the northern state of Uttar Pradesh, according to the emergency response service, at least seventeen people were killed. In West Bengal and Andhra Pradesh, too, several fatalities are to be regretted by the storm. Lightning strikes and house collapse are most often mentioned as a cause.

The very strong wind that is driving a lot of dust caused serious nuisance in various parts of the country. Trees were uprooted, the traffic disrupted. Many flights had to be diverted at Delhi airport.

Also in the next 48 to 72 hours the northwest of India must again take into account heavy thunderstorms. This weather type often occurs in the run-up to the rainy season. The monsoon time starts in June.