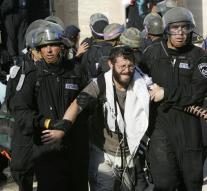 jerusalem - It remains restless in Israel . Sunday came a pregnant Palestinian woman and her three year old daughter in an Israeli air strike killed in the Gaza Strip. Israeli police further stated that it had managed to prevent a car bomb was driven Jerusalem . The latter was denied by Palestinians again .

The last twelve days , three Israelis and 23 Palestinians died in the violence. The violence is partly caused by the decision of the Israeli authorities to allow Jews more access to the al-Aqsa Mosque. The church is a holy place for both Muslims and Jews. Since then, the violence spreading across country.