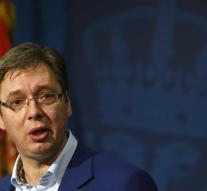 belgrade - A new weapon in Serbia find feeds concerns about possible attacks being planned by politicians. In a stolen car in Belgrade exceeded police Tuesday automatic weapons, ammunition and a quantity of explosives. Earlier it was discovered in bushes near the house of Prime Minister weaponry.

The two findings are in accordance with the security authorities in relation to each other. Prime Minister Aleksandar Vucic, moreover, thinks there be planning an attack on his brother.