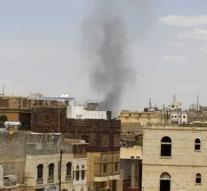 dubai - Houthi rebels have fired missiles from Yemen to Saudi Arabia. According to their news agency Saba, this time it was about eight ballistic projectiles aimed at 'economic and essential goals' # \u0026 # x27; in the province of Jizan.

The Saudi Ministry of Defense said that four missiles were intercepted. Nothing has been communicated about possible victims and damage. In the night from Friday to Saturday, the military coalition led by Saudi Arabia carried out another umpteenth attack on the Yemeni capital, Sanaa. Two Houthi leaders were killed. Last week, one of the key leaders was eliminated.

The terrorist service of Yemen settled in the southern port city of Aden with a commander of the local branch of Islamic State. The police released a photograph of the bloody corpse.