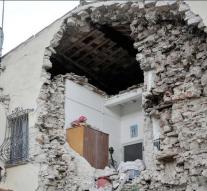 rome - Central Italy was again hit by an earthquake in the night of Wednesday to Thursday. The region has recently been through several earthquakes struck, this time had to endure an earthquake with a magnitude of 4.8, reports the Italian news agency ANSA.

According to Italian media was the epicenter at Pieve Torina 51 kilometers east of Perugia and just 10 kilometers deep. A quake with a force of 5.0 is considered to be average but the fact that it did not occur as deep, strengthens the earthquake to the surface. On damage is not yet known.

Sunday there was an earthquake of one strength of 6,5 place near Norcia and a few days before were there even though earthquakes have been 5.5 and 6.1. Since then, more than a thousand small aftershocks measured.