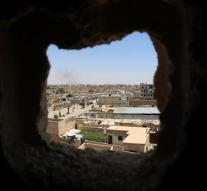 damascus - Thirty-three citizens were killed early in the morning by an air strike in a village in eastern Syria. Also, according to the Syrian Observatory for Human Rights, tens of people were injured in the bombing in al-Dablan, a place owned by Islamic State.

It is the second bloody air attack on a target in eastern Syria in a few days time. According to the Observatory, there were 57 deaths at the bombing in Al-Mayadin, which is on the river Euphrates. The international coalition against IS would have fired a prison of the terrorist organization.

It is still unclear what country on Wednesday took the air attack in al-Dablan, says the Observatory. The organization is trying to map out human rights violations in Syria from Britain by calling on local activists.