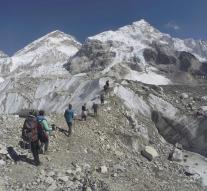 kathmandu - On Mount Everest is a mountain climber deceased again. The IndiërSubhash Paulis after the Dutchman Eric Arnold and Australian Mary Strydom third climber who died in recent days on the slopes of the highest mountain in the world to altitude sickness, the Hindustan Times writes.

Paul did on the night of Sunday to Monday life, let Wangchu Sherpa of Nepal Trekking Camp, which organized the climbing expedition, namely the Indian newspaper. Paresh Nath Chandra and Gautam Ghosh, two Indian companions of Paul, missing since Saturday. According Sherpa is unlikely to have survived because their oxygen tanks now have to be empty.

A fourth ill member of the party, the Indian Sunita Hazra, enters a lower camp forces to continue its way to the valley.