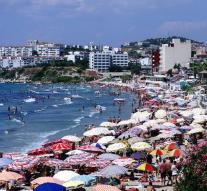 - Just before the start of the summer season, the Turkish tourism industry has continued to receive a hefty blow. In May, the number of foreign visitors compared to the previous year with 34.7 percent. Especially tourists from Russia saw nothing more in a holiday in Turkey.

The decline was, according to the Ministry of Tourism with them no less than 91.8 percent. That is especially the chilled relations between the two countries after the shooting down of a Russian fighter.

Turkish President Recep Tayyip Erdogan Monday offered his apologies to the relatives of the deceased pilot. He hopes thus to ensure adequate relaxation with Moscow to offer to move the Russian agency again charter flights to Turkish tourist resorts.


Another reason for the lack of foreign travelers, the continuing threat of terrorist attacks.