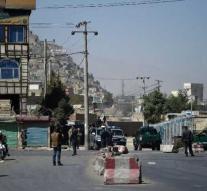 kabul - At least twenty people were killed by a bloody double attack in the Afghan capital Kabul. Another seventy people were injured, the authorities say. A spokesman for the Ministry of the Interior stressed that the number of victims is likely to be adjusted.

According to the first reports, a terrorist blew up at a sports center in a predominantly Shiite neighborhood. When the emergency services and journalists arrived, a second explosion occurred. The responsibility for the attack has not yet been claimed.

Extremist groups more often commit attacks on civilian targets in the city. For example, dozens of people died last month due to a suicide attack in a training center. A suicide bomber would have struck a classroom.