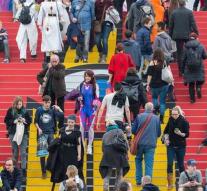 leipzig - Fighting left and right again at the German book fair. In Leipzig, where nearly three thousand publishing houses sell one hundred thousand books in the Messe halls, today it once again came to grime and shouting, pushing and pulling. Half a year ago it came to the world's largest book fair, the Frankfurter Buchmesse, even to disturbances between radical right-wing intellectuals, their supporters and hundreds of left-wing activists.

They shouted loudly: 'There is no right of opinion for Nazis!' But the management of the book fair claimed that everyone can sell the books he wants if it is not expressly forbidden.

The central place of the protests was the stand of the right-wing publisher and ex-soldier Götz Kubitschek, who, with his Antaios publishing house, gives a lot of radical figures a forum. Like the blogger Fjordman, from whom the Norwegian mass murderer Anders Breivik derived his delusions. Or people who believe that the Berlin politicians have a master plan to exchange the German people against migrants. Or, as a result of popular accusations, mafice convicted as Akif Pirincci who preach racist nonsense.

Since the refugee crisis in 2015, our eastern neighbors have been faced with an outright cultural battle, a 'Kulturkampf. Last week in East German Dresden came a verbal dispute between Uwe Tellkamp, ​​the award-winning bestselling author of 'De Toren', and poet Dürs Grünbein. The former writer showed an understanding for the Islam critics and foreigners of Pegida in the 700-year-old Kulturpalast of the Elbe city. After that, his publisher Suhrkamp went away from his author.