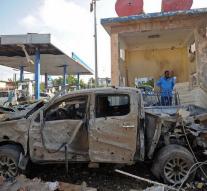 - The Islamic terrorist movement al-Shabaab has once again committed an attack Monday in Somalia. This time it was a military base 50 kilometers from the capital Mogadishu targeted. At least ten soldiers lost their lives in the attack.

The attack began with a car bomb that was placed at the base exploded. Immediately afterwards, an unknown number of terrorists stormed the complex. There was a gun battle that lasted hours. Eventually, the attackers withdrew. According to the Somali army left twelve dead al-Shabaab behind.

The last two weeks, attacks have been perpetrated on a bus and a large hotel. Thereby fell eighteen and fifteen deaths respectively.