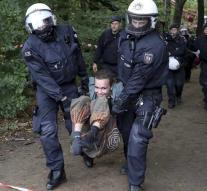 kerpen - The German police performed seventeen arrests on Friday in the 'brown coal forest' near Hambach, between Kerkrade and Cologne. Here, environmentalists are trying to prevent energy group RWE from cutting down the forest to win brown coal. There are ancient trees in the forest.

Activists kept the place occupied for years. The police began Thursday dismantling the dozens of tree houses in the forest. When six people were arrested, five of whom have since been released. Agents picked up the settlement 'Oaktown' on Friday. They carried out several activists who had chained themselves.

The environmentalists tried unsuccessfully to stop the eviction of the forest via a corridor to court. He did not agree with the 'forest crackers'.