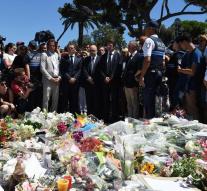 - French police Sunday morning a man and a woman arrested in connection with the attack on the promenade in Nice on Thursday.

In addition, 84 people were slain, which celebrated the national holiday on July 14.

The authorities now hold a total of seven people trapped in connection with the attack, which was claimed by terrorist group Islamic State. Police have no concrete evidence yet that the perpetrator had ties to radical Islam.


The 31-year-old Tunisian perpetrator, Mohamed Lahouaiej Bouhlel, drove a truck on the crowd, zigzagging along the Promenade des Anglais. Only after almost two kilometers in the end the police shot him dead.