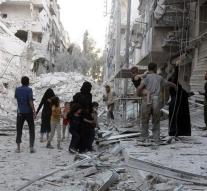 aleppo - Warplanes Saturday re-run attacks on the heavily besieged Syrian city of Aleppo. The attacks focus on the eastern part of the city that is in the hands of rebels fighting against the regime of President Assad.

A spokesman for the rebels nor the Syrian Observatory for Human Rights could indicate which country the planes came. Also, no data are available on possible casualties. The attacks support the advance of the Syrian government forces in and around the city.

The controversial Aleppo is the largest city in Syria. At the start of the Civil War the city had 2.7 million inhabitants.