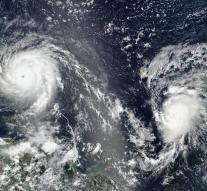 the bilt - Saint Maarten has to make up for another hurricane in the coming days. José is coming. The new storm is a lot less powerful than his sister, but again, according to Weeronline.nl weather agency, after the devastating power of Irma, it can again inflict a lot of damage to the island.

According to the calculations, it is expected that José arrives near Sint Maarten on monday. But it could also be a few days earlier and the price may also differ. 'A hurricane is difficult to predict. The models indicate Monday, but a hurricane often also goes its own way. It may also be that José has come by the weekend, 'said a metroist of Weeronline.

Hurricane Irma has not yet lost its power and is now moving to the Caribbean as a category 5 hurricane north of the Dominican Republic in the western direction. Sunday morning early (local time) will reach Irma Florida, reports Weatherplaza.

Irma remains a category 5 hurricane, even if Saturday is the Bahamas. In the direction of Florida, there seems to be some decline in the crowd. But as a category 4 hurricane, Irma can still cause a lot of damage in the US.

The power of Hurricane José is estimated less vigorously. It is now a hurricane in category 1 that can still grow into category 3. But before saturday José begins to lose weight again.