Home / World / After gambling and prostitution also blow in Nevada 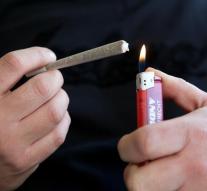 las vegas - In the US state of Nevada, where gambling and prostitution are already legal, free marijuana can also be purchased from Saturday. In the night of Friday on Saturday a law came into force that makes it possible.

In more than ten stores in the state, with gambling paradise Las Vegas as the largest city, weed can be purchased by adults over 21 years with ID. Public use is forbidden.

The residents of Nevada agreed to the sale of soft drugs during a vote in November. It is the fifth state in the US where marijuana can be sold legally. Washington, Colorado, Oregon, and Alaska preceded Nevada.

The Democrat Tick Segerblom, a member of the state senate, was probably Las Vegas's first legal weed buyer on Saturday.