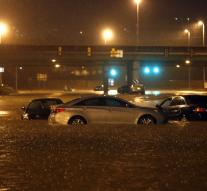 - Severe weather continues to plague parts of the United States. Friday night (local time) was mainly the state of Alabama hit by severe thunderstorms. A tornado swept through the city of Birmingham and heavy flooding forced the governor of the state to the state of emergency.

By the command of Robert Bentley emergency may turn out faster in the state, which is groaning under the heavy rain. In the coming months there will be more water coming down. We will keep flooding in the holes and turn out when necessary , said the governor, according to regional media. Roads are closed and there are fears that a 22-year-old woman and a five year-old child were killed when their car was swept away by the water at the village of Jack.

In the city of Birmingham tornado destroyed houses, although there are no reports of casualties.