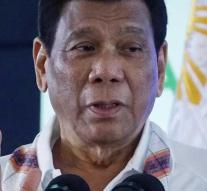 manila - After his bloody battle against drug trafficking and use, the Filipino president Rodrigo Duterte now turns his eyes on communist rebels who have been active in the country since the sixties. He announced the creation of a 'death squad'.

Duterte reported that the special forces have permission to kill. 'If you see three or four, turn them all over,' said the head of state.

After Duterte came to power in 2016, he started a witch-hunt for everything related to drug trafficking and use. Not only soldiers and police came into action, hundreds of drug dealers and users were shot by civilians.