Home / World / After a submarine now plane with drugs in Suriname 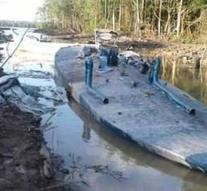 paramaribo - The Surinamese police have intercepted a plane with drugs in the west of the country. Four people have been arrested. The National Information Institute announced this on Tuesday. No announcements were made about the quantity and type of drugs.

In the same district, Saramacca, the police found a submarine a week and a half ago that was used for the transport of narcotics. It is not known whether there is a connection between the two cases. In the case of the submarine eight people were arrested, seven Colombians and one Cuban. They are probably illegal in Suriname.

In order to prevent Suriname becoming a transit port for drugs, the Ministry of Justice and Police has formed a special unit. This has traced the plane.