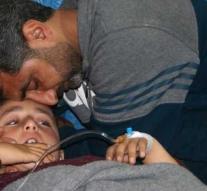 beirut - Turkish forces have again carried out air strikes on Friday evening at the Syrian city of Afrin, which was controlled by the YPG. According to the Syrian-Kurdish militia, the only large hospital is bombed. Nine people have been killed as a result. The mortar bombardments also continued.

The Syrian Observatory for Human Rights confirmed the report and said that the death toll has risen to 27 in the last 24 hours, including seven children. That can be up to you given the number of seriously injured. Earlier in the day, the Turkish army had distributed pamphlets with the promise to protect civilians who want to flee the city.

Turkey denies that civilian targets have been bombarded during the offensive in the Afrin region, which began in January.