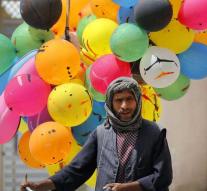 kabul - Dozens of unarmed Taliban fighters entered the Afghan capital Kabul on Saturday to celebrate the cease-fire and the end of Ramadan. According to the police, soldiers and militants embrace each other and make selfies together.

The Taliban had surprisingly issued a three-day cease-fire during the Sugar Festival that lasted three days. The cease-fire follows an announcement earlier this week by the Afghan armed forces to no longer take action against the Taliban until June 20.

The Taliban have entered Kabul through the gates in the south and southeast. 'They are unarmed as they handed over their weapons at the entrances,' said a Kabul police spokesman. 'Their weapons will be returned when they leave,' he told Reuters news agency.