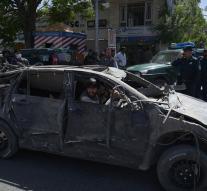 frankfurt - An airplane flying Wednesday with rejected Afghan asylum seekers from Frankfurt to Kabul will not leave as a result of bombing in the Afghan capital. According to the German media, the Minister for the Interior of the Land of Hesse, Peter Beuth, said that 'the orderly settlement of the expulsion' can not now be guaranteed by the embassy in Kabul.

Beuth said they should be deployed as soon as possible. There is a stir in the Hesse parliament. A few parliamentarians now demand that the expulsion be deleted. On Tuesday, a series of associations and action groups urged the resignation of Afghans to cease. They argue that the migration service policy threatens the return of many Afghans. The Federal Republic rejects approximately half of Afghanistan's asylum questions.

A massive bomb exploded in Kabul on Wednesday, not far from embassies and ministries, the headquarters of security services and the palace of the president. The German embassy is severely damaged.