Home / World / 'Afghan was not related to networks 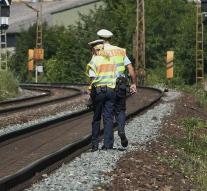 - There are no indications that the Afghan teenager who attacked passengers in a German train had links with Islamic terrorist networks. That explained the Interior Minister of Bavaria Tuesday.

He that the seventeen-year-old migrant was one of its fighters was responding to the claim of terrorist organization Islamic State (IS). According to Minister Joachim Herrmann, the Afghan chose his victims at random. The attack on the train were four injuries. The victims belong to a family from Hong Kong. Later, the injured Afghan woman during his flight still light.

From documents found at home at the attacker, according to Herrmann shows that the Afghan,, lately radicalized by itself. ' There include a text found in Pashto, a language spoken in Afghanistan and Pakistan.