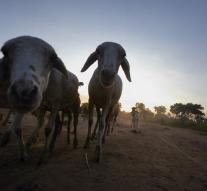 - Afghan police have arrested a man who would have swapped his six year old daughter at two goats and food. The child then married a man of sixty, who has been arrested previously in accordance with TOLOnews.

The girl's father told the police that he traded his daughter to a goat, a lamb, a sack of flour and butter. Furious women harassed the man when he went to the police station in the Ghor province to advocate for the release of the groom.

The prosecutor promised a thorough investigation into the case. Both the husband and the father of the child hangs a prison sentence over his head. The girl would be placed in a safe location.