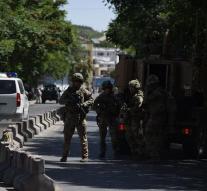 The Afghan military has been shot dead. The US Department of Defense reported only that there was 'an incident in eastern Afghanistan' but did not provide further information.