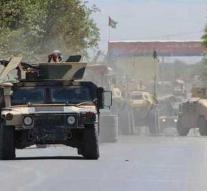 kabul - An Afghan MP was killed Wednesday by a bomb that was placed under his office chair. Three other people were also killed in the attack, which has been claimed by the radical Taliban.

Abdul Jabar Karaman was killed while he prepared for the parliamentary elections next Saturday, a high official said. He is the tenth candidate who has been murdered in the past two months. Two others were kidnapped and four were wounded by Islamic militants.

Karaman sat in the parliament for the province of Helmand and had made himself eligible again.

'Such brutal acts of terrorists and their supporters can not weaken the confidence of people in the peaceful and democratic processes,' President Ashraf Ghani said in a statement condemning the attack.

On Saturday, a new parliament in Afghanistan will be elected with three years' delay. More than 2500 candidates, including four hundred women, compete for the 250 seats in parliament. The elections were postponed several times because of delays in the electoral reform.