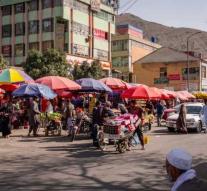 kabul - At least six children were killed when they played with an unexploded rocket in the Afghan province of Laghman. All victims are girls, report the Afghan news channel TOLO.

The provincial authorities say that the projectile exploded while playing. Four of the deceased girls are from the same family.

UN mission UNAMA has calculated that in the first half of 2018 nearly 1700 civilian deaths have been caused by the conflict in Afghanistan, where the authorities are fighting with armed groups such as the Taliban and Islamic State. In 363 cases it concerned children. The use of explosives by insurgents in particular leads to many civilian deaths.