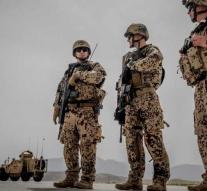 kabul - Afghans who worked for the German army in their own country want permission to travel to Germany. Some 120 former employees of the Bundeswehr have been demonstrating for weeks at a German army camp at Mazar-i-Sharif to reinforce their claim.

The Afghans say for years that security officers and interpreters have worked for the Germans. The ex-employees now fear that their lives are in danger and want to go to Germany. Their captain states that representatives of the German camp Marmal have not fulfilled their commitments.

Angry former employees say that they are not believed to be really threatened by the Taliban. Those insurgents still control large areas in Afghanistan. One of the demonstrators says that the protests continue until they reach their goal.