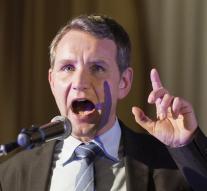 dresden - A politician from the right-wing political party Alternative for Germany on Wednesday sued to stop remembering and fines for the German Nazi history.

Björn Hocke who leads the party in Thuringia, said during a speech in a beer hall in Dresden that Germany afmoet the tradition of remembering the crimes committed during the Nazi era. The Holocaust memorial in Berlin he called a 'monument of shame '.