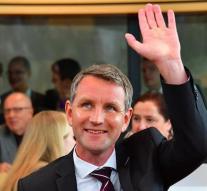 berlin - The party executive of the German right-wing populist Alternative for Germany (AfD) has decided to put the AfD leader in Thuringia, Björn Hocke, from the party because of controversial statements about the Holocaust Memorial in Berlin. Nine board members including party leader Frauke Petry voted Monday for the departure of Hocke, four against, Der Spiegel reported.

Hocke annoyed is handled in a speech in January in Dresden the way in Germany in the past. Not the glory of the nation is central, 'but Germans are the only people in the world who has put down a monument of shame in the middle of the capital. '

Hocke said the way Germans deal with their past 'harmful' and called for 'a total reversal in the way remembered. 'It led to strong reactions, because it was assumed that Hocke would like to print the Nazi past in the background.