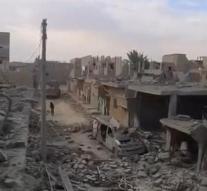 washington - The US Army has conducted an air attack in southern Syria on militia supported by the Syrian government. The reason for this was that the militias had come too close to the statements of America-backed warriors.

The action was at the town of At Tanf. The aircraft went into attack after warning shots had not aligned.