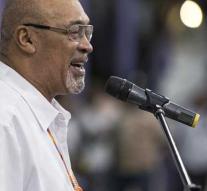 paramaribo - Desi Bouterse must be acquitted of the death of fifteen opponents of his then military regime in December 1982. His lawyer Irvin Kanhai argued in the lawsuit about the December murders. He stated that there is not enough evidence that Bouterse is guilty. According to him, it was not the intention that the critics were killed.

In addition, counsel finds that the Public Prosecution Service should be declared inadmissible and he wants judges to declare themselves unauthorized to judge in this process. The Netherlands must pay any compensation that claims survivors. After all, the fifteen acted in cooperation with the Netherlands, according to Kanhai.

In his three-hour plea for the court martial in Paramaribo, Kanhai fled to the Netherlands, which he believed was an old coloniser trying to interfere in Surinamese politics with the aim of getting Bouterse away.

Against Bouterse, now president of Suriname, twenty years of imprisonment have been demanded.