Home / World / Advisors Trump had a lot of contact with Kremlin 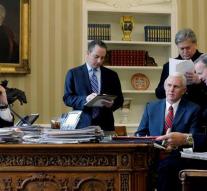 washington - Michael Flynn and other US Trump advisors already had contact with the Russian authorities, before Trump was elected president. This is evidenced by at least 18 e-mails and telephone conversations that the press agency Reuters knows about.

On Tuesday, Trump confirmed that secret information about terror and aviation safety had been shared with Russian President Putin. Trump indicated that he had done this because of humanitarian reasons and also to encourage Russia to fight against IS. In addition, he said, he has the 'absolute right' to do that as president.

Press agency Reuters reported Thursday that Trumps former advisor Michael Flynn and others had already been in contact with the Russian authorities in the last seven months of the election campaign in 2016, in the form of at least 18 emails and telephone conversations. Six of them took place between the former ambassador for Russia in America Sergey Kislyak and Trump's most important security advisor Michael Flynn.

Their talks focused on improving economic relations between Russia and the US, cooperation in the fight against terrorist organization of Islamic State and how to restrict China's power at world level.

In addition, there was talk of organizing a communications system that could bypass US security bureaucracy, which both parties oppose.

Security adviser Flynn had to resign after almost one month after acquitting his knowledge of Vice President Mike Pence wrongly informed of his previous contacts with Russian officials after the presidential elections. In addition, he failed to report that he visited the Kremlin in Russia at the expense of Russia in 2015 and spoke with Putin.

The White House and the Kremlin have not commented on the new revelations. Flynns lawyer also refused to respond.