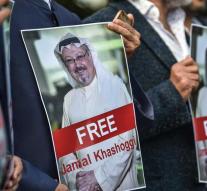 ankara - The Saudi journalist Jamal Khashoggi was murdered at the consulate of Saudi Arabia. That is what Yasin Aktay, adviser to President Recep Tayyip Erdogan of the Turkish ruling party AK, told TV channel CNN Turk. He said earlier that Khashoggi did not leave the consulate in a 'normal way'.

According to Aktay, there are images of Khashoggi who enter the consulate, but nowhere on camera is recorded that he leaves the building again. A special team of fifteen Saudis would be involved in the disappearance of the journalist.

On Saturday, Reuters news agency quoted anonymous Turkish officials about the case. 'We believe that the murder was premeditated and that the body was subsequently moved out of the consulate. 'Turkey thinks Saudi Arabia wanted to silence Khashoggi. Saudi Arabia emphatically denies the accusations.

Khashoggi has not been seen since he went into the consulate in Istanbul on Tuesday to arrange his divorce in order to get married again. His Turkish fiancée did not hear language or sign from her friend afterwards. He is a welcome guest in Arabic talk shows, who did not shy away from criticism of the Saudi government policy. In columns he denounced politics regarding Qatar and Canada, the war in Yemen and the punitive expeditions against people with a different opinion.

Khashoggi also wrote columns for The Washington Post. This newspaper left his column empty on Thursday. 'If the reports of the murder of Jamal are true, it is a monstrous and inscrutable act,' the newspaper responded.

Riyad insists that Khashoggi left the same day after doing things. Crown Prince Mohammed bin Salman offered to visit the Turks on Friday in the consulate.

The Turkish president Tayyip Erdogan hopes for a positive outcome in the case of the disappeared Saudi journalist Jamal Khashoggi. According to Erdogan, the available camera images are viewed and airports are looking for Khashoggi. Erdogan's statement is at odds with the statements of his adviser.