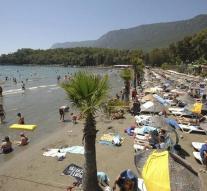 - Since last night Turkish citizens should not simply leave Turkey. To go out of the country are Turks need an additional travel document. Which would be available at town halls and other public buildings.

In the port of Marmaris, a group of Turks who, unaware of the new rule, missing their boat to Greece. There's a lot of grumbling. Customs officers they are not due to leave without the document. Also Turks with dual citizenship (and passport alongside their Turkish passport) may not. It is still unclear whether there are costs associated with the extra paper and how fast to get it.

It is still unclear why the measure is set. Customs staff at the Turkish port would only say that they 'performed assignments.